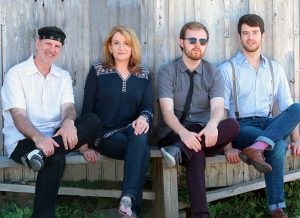 American bluegrass musician and songwriter Claire Lynch has one of the best voices in bluegrass. She is a three-time winner of the International Bluegrass Music Association’s “Female Vocalist of the Year” award and a three-time Grammy nominee. Her 12 albums have garnered numerous awards and nominations, and she received the prestigious Walker Fellowship Award in 2012. Claire’s “North By South” album – a collection of her favourite songs by Canadian singer-songwriters – was nominated as “Best Bluegrass Album” at the 2016 Grammy Awards. Claire has recorded with Linda Ronstadt, Emmylou Harris, Alison Brown, Dolly Parton, Pam Tillis, Ralph Stanley, Jim Hurst, Patty Loveless, Kathy Mattea, Jesse Winchester and many more. The Claire Lynch Band features Mark Schatz, Bryan McDowell and Jarrod Walker, who are among the most accomplished musicians in the industry. This is Claire’s first visit to Canada’s National Capital area, home of Juno Award winner Lynn Miles. Claire included Lynn’s song “Black Flowers” on her Grammy-nominated “North By South” album, and the two have subsequently become friends. Claire is delighted that Lynn will be performing in the concert with The Dusty Drifters, a beloved Ottawa-based bluegrass band. Website: www.clairelynch.com
————–

Lynn Miles is one of Canada’s most accomplished singer-songwriters.  She has twelve albums to her credit, and recognition that includes multiple Canadian Folk Music Awards and a 2003 Juno Award for Album of the Year.  Through a career that has seen her move from Ottawa to Los Angeles and back again, with stops in Nashville and Austin in between, Lynne has always written and performed with unbridled feeling and vulnerability, and always has a powerful impact on listeners.  Her astute observations of life – its trials, heartaches and triumphs – are the hallmarks of her sweet, beautiful music. Website: www.lynnmilesmusic.com
————–

The Dusty Drifters emerged on the Ottawa bluegrass scene in 2010, introducing a whole new generation to the beauty of bluegrass through their three-year run of weekly “Sunday Night Bluegrass” shows. A popular favourite at festivals throughout eastern Ontario, this five-piece band combines a passion for traditional bluegrass with fiery contemporary instrumental and vocal work.  Website: www.thedustydrifters.com. Band members: